Los Angeles, CA, May 10, 2017 – Rock and R&B-influenced group Roadcase Royale will be releasing a brand new single entitled Not Giving Up on May 12th. The band is fronted by Rock and Roll Hall-of-Famer Nancy Wilson of Heart and Liv Warfield of Prince’s New Power Generation, and also includes members from each of their respective bands. Not Giving Up is a hard rock song that contains politically charged lyrics, following in the footsteps of the band’s debut single, Get Loud, which debuted at the January 21st Women’s March. The video for “Not Giving Up” will also be released next week via the group’s YouTube channel. 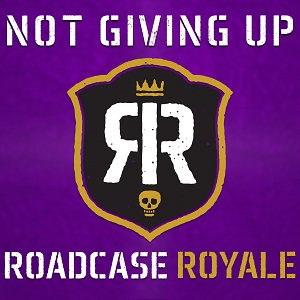 The track opens with Ryan Waters iconic bluesy guitar riff followed by the powerful entrance of the full band. The intensity level builds up during the first verse and climaxes at the chorus with the return of the same driving guitar riff and Warfield’s searing vocals. The song’s refrain sends a message to stay strong in today’s politically divisive times, saying, “We watch you building up the wall, We’re waiting just to see it fall, I’m saying we’re not givin’ up, givin’ up, no.” With powerful lyrics and their full-tilt musicianship, Roadcase Royale will be “Not Giving Up” anytime soon.

Nancy Wilson had this to say about the “Not Giving Up”:
"The first time I listened to Liv and Ryan’s track of Not Giving Up I was floored by the deceptive simplicity and the powerful message of their song. I could hear the potential to make it our own. I knew right away we would be able to take that song not just for a test drive but straight onto the big rock race track!"

More about ROADCASE ROYALE:
Led by former Prince collaborator Liv Warfield and Nancy Wilson, co-founder of Heart, ROADCASE ROYALE has a rich background in rock and R&B. Warfield, Wilson, and their bandmates bring their decades of experience from the upper echelon of the music industry to ROADCASE ROYALE, along with a renewed sense of direction and drive. Joining Wilson and Warfield are Warfield’s lead guitarist and musical director Ryan Waters and Heart veterans Dan Rothchild (bass), Ben Smith (Drums) and Chris Joyner (Keys). Each of these members shine in ROADCASE ROYALE with their various sensibilities creating the group’s sensitive, passionate, and driving rock and R&B sound.

For more information or a review copy of “Get Loud” or “Not Giving Up” please contact: