Chicago, IL, June 2, 2017 - Contemporary pop singer-songwriter Elle Casazza captivates listeners with her authentic and re-creative pop music style. The Chicago native adds and blends an invigorating mix of jazz, soul and funk rhythms into her songs. After releasing her pop-funk laden track “Too Bad,” Elle has followed up with a dynamic music videoentitled “You,” both taken from her recently released full-length album, Proof. The single will be available for radio add dates on June 5thfollowing the music video release on June 2, 2017. 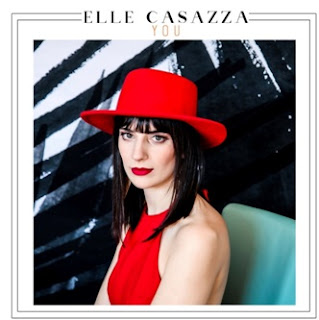 “You” is an encompassed piano love ballad highlighting a devoted andtrustworthy relationship that is entirelytimeless. Elle expresses that each partner accepts the other’sflaws, mistakes and will be ever forgiving as they continue to learn and grow together as a couple.Casazza’s impassioned vocals and purely honest songwriting leads us into an empowering bridge that carries out the song with a full band and harmonic back-up vocals. The uplifting peak then shifts back to a soft ending as Elle gently sings “you take the good with the bad, you’ll stay forever my man,” closing out the entire piece.

The music video begins with Elle in her dressing room, serenading the camera as she walks through an endless hallway that leads her to a blue velvet curtain. Elle comes through the curtain and stops in her tracks in a blue-tinted room.As her journey continues, Elle reaches a spotlighted stage which closesthe video with a full band performance of “You.”

Elle Casazza reveals a uniquely live element that is incorporated into her retro-pop style and it has not gone unnoticed. She has been reviewed and featured on Paste Magazine, Midwest Action, WLUW’s Radio One show in Chicago and more. Elle Casazza hasperformed solo or with her five-piece band at some of Chicago’s premier venues such as Concord Music Hall, Martyrs, Mayne Stage and many others. Elle Casazza continues to add tour dates as the summer goes on to promote her recent album, Proof.