Waldorf Publishing is excited to be releasing the new book “Inside the Godfather”, Never Before Told Stories of James Brown by His Inner Circle. Written by: Daryl Brown, the son of James Brown and Michael P. Chabries. If you think you know the soul truth about James Brown, think again! 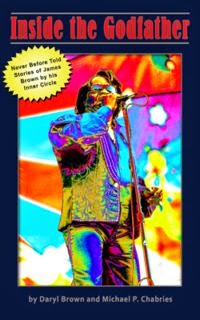 Daryl Brown believes that his dad…James Brown, his brother-in-law and his older brother Teddy were murdered.

Despite what Mick Jagger and the movie “Get on Up” would have you believe – James Brown never discharged a weapon during the insurance seminar prior to James Brown’s arrest ending him up in prison. Primary concern of James Brown was that he was being robbed.

Michael Jackson returned from exile in Bahrain to “play” with the body of James Brown while he was in the casket in a room at The Apollo, left alone for over 2 hours.

Susie Brown did not abandon James Brown as the movie “Get on Up” would have you believe. The relationship turned deadly with a murder attempt. Leaving the child was the only way to preserve both lives.

Black police officer Donald Danner believes James Brown was shot at by white police officers because of the color of his skin. 23 shots fired at the truck. Two shots hit the gas-tank in an effort to “lawfully” murder James Brown.

Tomi Rae was stopped by police for being married to a black monkey and the police told her they were going to kill James Brown. Overt racism and threat of “disappearing” or murder was a challenge for both Tomi Rae and Adrienne “James Brown’s 2 wives.”

The Inner Circle will include but not limited to: the Mistress, the Limo Driver, the Widow, the Bodyguard, Band Members, Personal Physician, an Arresting Officer and many more!

The book will be available August 1st, 2014 as a paperback, eBook and Audio book and will feature unique photos, some of which have never been seen. Pre-order your copy now!

The book will be released simultaneously with the Universal Studios biographical film “Get on Up” produced by Mick Jagger and Brian Grazer to be released in theatres on August 1st 2014.

In Daryl Brown’s own words: “How can Universal Studios distribute a movie about my dad without even talking to those that were closet to my dad including me?”

James Brown, The Godfather of Soul may be the most misunderstood man in the last century. His contributions toward modern music pale in comparison to the role he played in modern history. Brown lifted all races toward the ideals of equality and opportunity. Tragically, while he had the ability to calm the storms of social turmoil - his personal life was a perpetual tempest; sex, drugs, rhythm & blues.

Inside the Godfather brings together, for the first time, Brown’s inner circle. They will correct the distortions of the past and provide the reader a clear understanding of the brilliance and generosity that was James Brown. This book will have you question your assumptions about politics, religion, sports, money and the entire entertainment industry. You will see inside the man. You will never be the same.

The name, James Brown is an international Brand. His music is still being sold in over 110 countries. His face is certainly one of the most recognizable in the world. He is loved and adored by millions, but how many people really knew him?

Two hundred years from now when they mention James Brown, The Godfather of Soul, they will use this book to understand the person, the mind, the genius of one of the greatest entertainers of all time.

Waldorf Publishing: Was launched in 2013 by Barbara Terry. Barbara is a marketing and media expert with extensive experience in the Entertainment Industry. The first book published was by NASCAR great, Kenny Wallace.

Contact Barbara Terry to request an interview with Daryl Brown, Michael P. Chabries or Barbara Terry or to review “Inside the Godfather” in Paperback, eBook or PDF. BarbaraTerry08 @ aol.com, 303.550.8186, Twitter: @WaldorfPress, @GodfatherBook